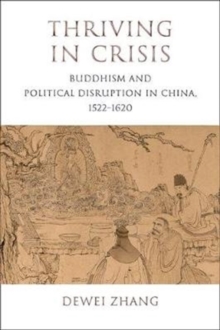 Thriving in Crisis : Buddhism and Political Disruption in China, 1522-1620

Late imperial Chinese Buddhism was long dismissed as having declined from the glories of Buddhism during the Sui and Tang dynasties (581-907).

Yet this alternate conception of the history of Buddhism in China has tended to focus on either doctrinal contributions of individual masters or the roles of local elites in Jiangnan, leaving unsolved broader questions regarding the dynamics and mechanism behind the evolution of Buddhism into the renewal. Thriving in Crisis is a systematic study of the late Ming Buddhist renewal with a focus on the religious and political factors that enabled it to happen.

Dewei Zhang explores the history of the boom in enthusiasm for Buddhism in the Jiajing-Wanli era (1522-1620), tracing a pattern of advances and retrenchment at different social levels in varied regions.

He reveals that the Buddhist renewal was a dynamic movement that engaged a wide swath of elites, from emperors and empress dowagers to eunuchs and scholar-officials.

Drawing on a range of evidence and approaches, Zhang contends that the late Ming renewal was a politically driven exception to a longer-term current of disfavor toward Buddhism and that it failed to establish Buddhism on a foundation solid enough for its future development.

A groundbreaking interdisciplinary study, Thriving in Crisis provides a new theoretical framework for understanding the patterns of Buddhist history in China.